A Letter For Bear – David Lucas 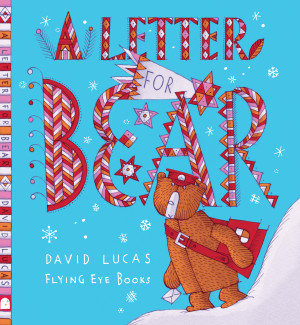 Poor Bear, who will send him a letter? Come rain or shine, he works so hard delivering the post to all the animals of the wood but he never receives anything himself. Hardly surprising since he’s never actually sent a letter! One day, Bear decides to write a few letters of his own, inviting all the forest animals to a party.

David Lucas‘ picture book is a beautifully rendered and finely executed story. The ease with which Lucas delivers this sweet and heart-warming tale gives his work, time and time again, the quality of a true classic.

“As remarkable a writer as he is an illustrator” – Publishers Weekly

Chaos Comments
This is an adorably cute little book, made with Flying Eye’s usual high standards and matt pages (my personal favourite – glossy doesn’t mean better). It tells the story of Bear the postie, who’s feeling rather lonely and in need of some cheery post. All the Chaoticians love getting real post through the letterbox (or even better, a parcel that doesn’t fit!) so we completely relate to Bear here. Especially when he delivers all those exciting looking letters with none for himself. It’s just not fair.

But one day, after an accident involving the wind and his postbag, all the letters are muddled so Bear gets to know all his neighbours which gives him an idea. Cue more post, in the form of invitations, and a happy ending as everyone visits bear and he gets lots of post at last. Joy.

Technically a Christmas story as Bear has a Christmas party, but A Letter for Bear can be read at any time of year. I especially love the art style, as it’s inspiring to the doodler inside me; the mini Chaoticians feel for Bear (they rarely get post addressed to them either) and love the size of this huggable book.

A Letter for Bear is also inspiring for art projects, with it’s mostly red and blue palette, and the trees and plants seem easy to replicate (they aren’t, of course, but we had fun with shapes and lines!) It’s also educational, with a whole host of Arctic creatures named on the end papers (Ptarmigans are birds. Who knew?)

A Letter for Bear would be especially lovely to read for advent, or find under the Christmas tree, and has earned its place in the Chaos Castle Library.

2 Responses to A Letter For Bear – David Lucas